Due to its contribution for more than six decades to peace and reconciliation in Europe, the European Union has acquired legitimacy, reliance and recognition in the subject. This experience is capitalized by the European Fund for Peace in Colombia through technical assistance and transferring methodology, which strengthens the local capacities and generates local sustainable development.

Effective and coordinated contributions of the 19 Member States of the European Fund for Peace in Colombia support the local institutions of affected territories by focusing on early recovery and post-conflict stabilization. Therefore, the Fund supports items 1 and 3 of the Peace Agreement: Comprehensive Rural Reform and Reincorporation of former combatants.

The European Union committed to peacebuilding in Colombia .

For the past two decades, the European Union has supported peace building in Colombia. From 2002 until 2012, the Peace Laboratories (local workshops for dialogue and peacebuilding) worked as a mechanism of technical and financial cooperation in order to create peaceful and pacific living conditions in the territories affected most by the armed conflict. The Fund gathers lessons to promote peace projects with a focus on rural development and sustainability.

The European Union, created by the desire for peace in European nations after World War II, has been a strong supporter of peacebuilding in Colombia for the past two decades.

This broad experience is capitalized by the European Fund for Peace in Colombia as an effective mechanism to respond to the government of Colombia’s request for assistance and channel the resources in a structured and efficient way. Furthermore, the Fund demonstrates the solidarity and political support of the EU for this important peace process and also promotes the general interests of the European Union as a whole. The Fund is made up of 20 countries and all of them work towards the same goal: to promote the generation of scale economies and accomplishing this to reach the utmost impact with efficiency and visibility of the European Union on the territory.

The EU has extensive experience in rural development, land restitution and local productive development, and the Fund´s objective is to support Colombia on comprehensive rural development in the territories most affected by the conflict, enhance economic and productive activities, strengthen state presence, rebuild the social fabric of communities and support the social and economic reincorporation of ex-combatants.

The six Strategic Pillars of the European Trust Fund for Peace in Colombia represent the strategic plan for generating results. More than 20 projects, despite their distinct focuses, share common objectives and come together in order to accomplish the Strategic Pillars.

The objective of these pillars is to facilitate the analysis of the results obtained by the EUTF and the specific contributions each project is providing to peacebuilding and to the promotion of equity, social transformation and peaceful coexistence in Colombia.

The final evaluation will determinate how the Fund has facilitated and supported the rural and territorial development processes in peacebuilding, democracy strengthening and reincorporation.

Geographic scope of the Fund

Go to Geographic scope of the Fund

The geographic scope of the EUTF is the entire territory of Colombia but giving priority to the territories affected the most by the armed conflict based on the specific needs and special attention the vulnerable rural municipalities demand. 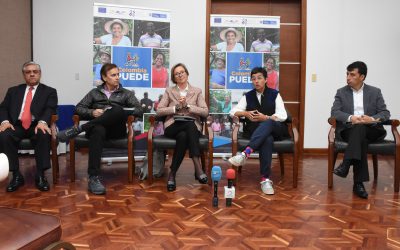